BOW BEFORE YOUR GOD. It's late and I'm bored, so I'm not going to use the extra half hour building more. 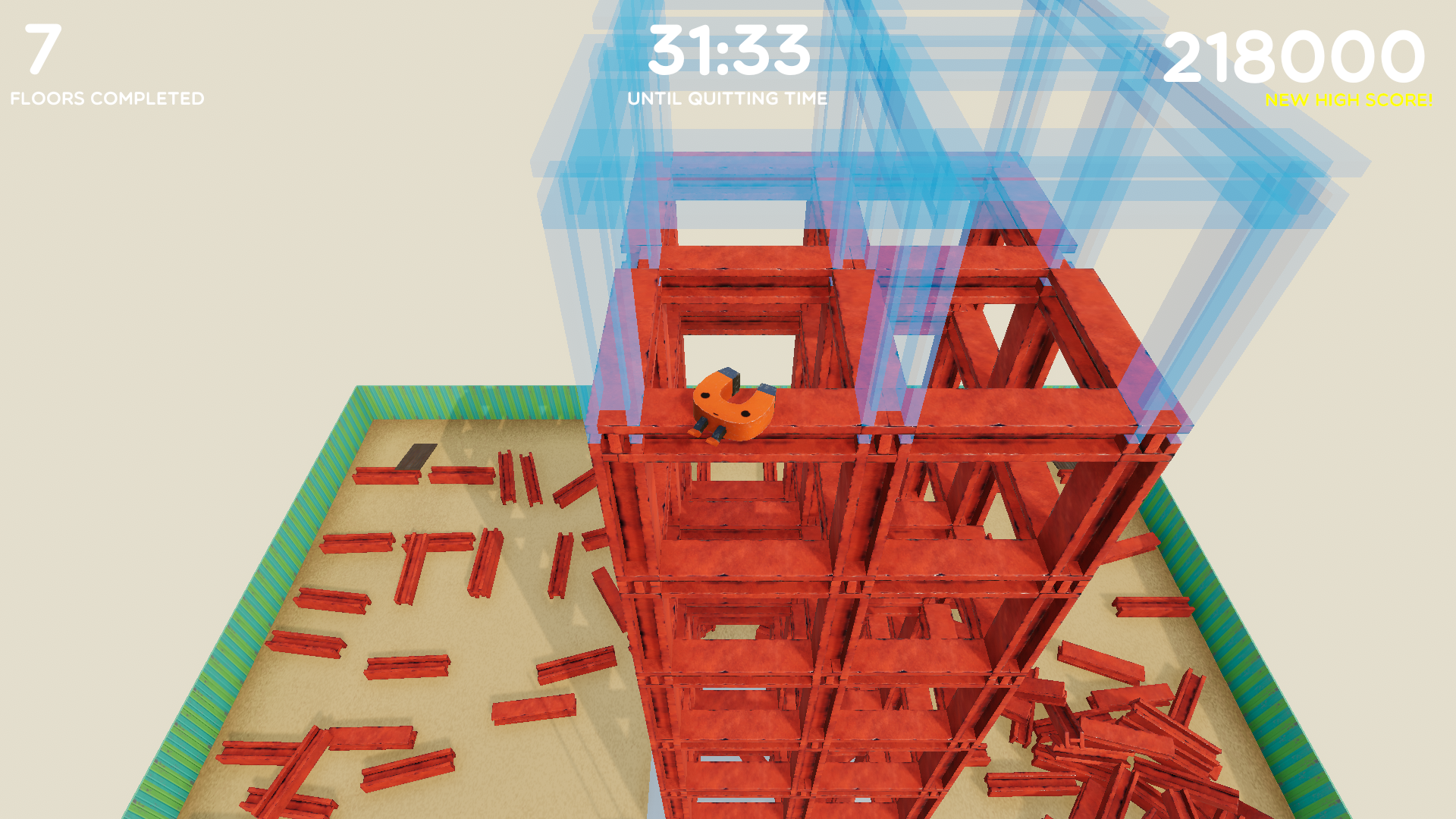 HOLY GUACAMOLE! You are amazing!

Dear Andrew, you already know that you are one of my favorite game developers, but let me tell you once more why I loved "Magnethead Construction Company": On the one side, you are always creating such cute main characters like the magnethead, which are just adorable! On the other side, it felt immensely satisfying to me to climb up on my creation just to build it higher and higher. You are always offering so lovely games with a slick gameplay, and I hope you won't stop. :) I recommended this game in a little article and also made a little gameplay video of it, maybe some other potential players will stumble over it and give it a shot afterwards. <3

Pretty fun game, but after the second floor it felt like things weren't working as well? Like it was harder to climb or go up the crane. I feel like maybe a controllable camera would really help this game out since the fixed camera doesn't allow you to see all around, along with a time or 2 where it zoomed in really close and I couldn't see anything at all, it was really annoying not being able to see why I was stuck behind a beam some times and how to move to get unstuck and not drop the beam I was carrying. Still really enjoyed the challenge, and I hope you enjoy the video!

Super fun but really hard after a while

Actually quite enjoyed this. I sort of wanted to keep going but I figured I should avoid an hour long video! 125k score.

Everything was going fine.. until the second floor. That damn crane:D Can't you just made an elevator :D I'm quite curious about the attraction system you made. 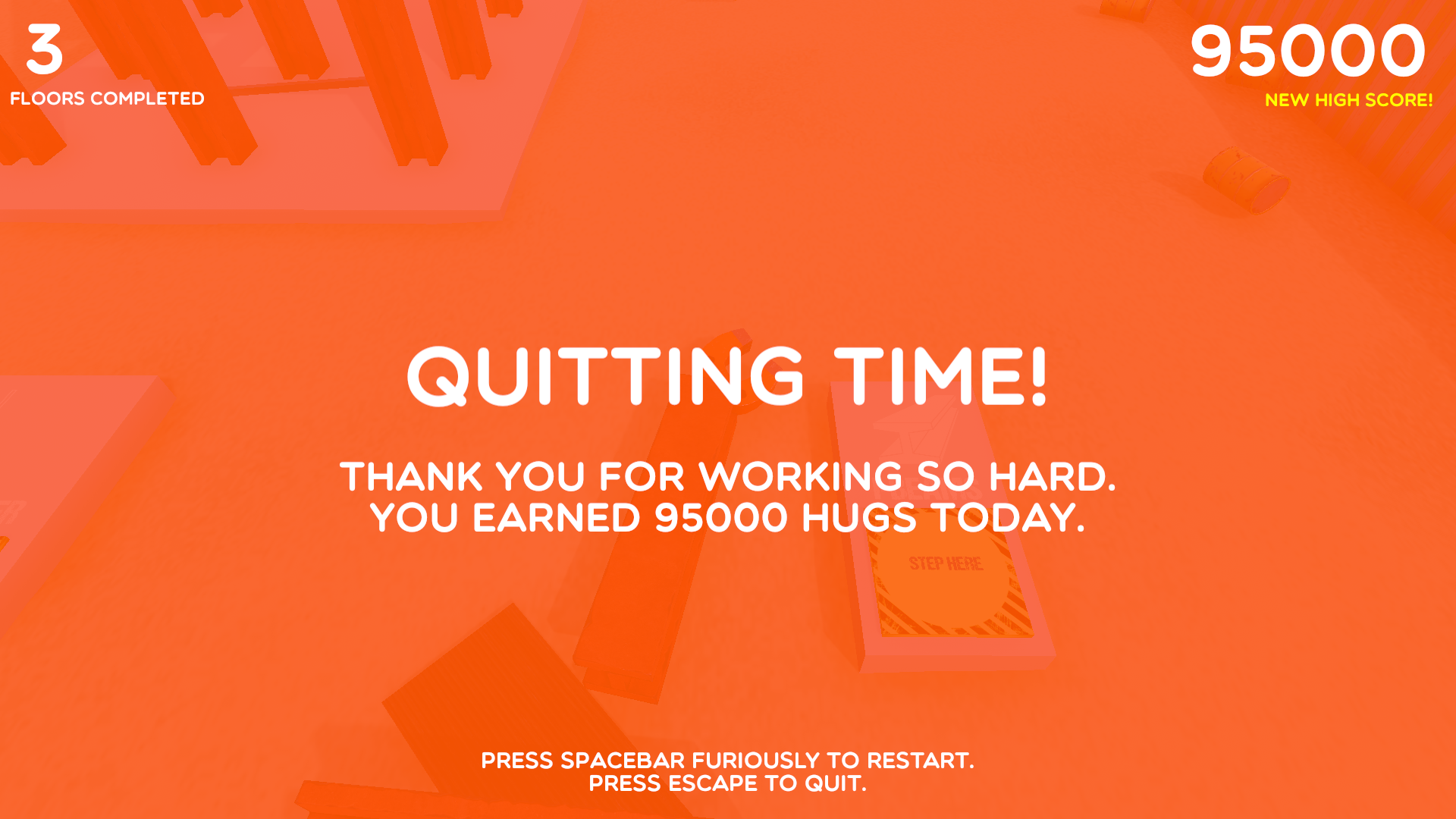 Impressive score!! The all-time high I've ever seen is 106000 (my wife's 4 hour playing frenzy).  I think that completing the 4th floor would have required genius levels of skill, and/or miracle levels of luck. The crane doesn't scale well for higher floors currently because it moves too fast for higher floors. There were supposed to be optional clumsy elevator platforms and optional floor boards that you'd be able to build during later levels, but I didn't get time to do that during the jam. Also there'd be trucks and construction equipment that drive around, which you could use as something large and magnetic to step on. Oh well, maybe later.

The attraction system (ab)uses Unity's Particle System's collisions. Every second, hundreds of invisible little particles shoot out of the poles of the magnets and collide into magnetic objects only. Each particle collision generates a little pull between the object (at the point of the collision) and the magnet's pole, depending on how far away it is. See this tweet for a gif showing a debug view of the particle collisions:

It's not true to real physics, but geared more for clumsy fun physics. The real physics prototype (the thing I was salvaging in SalvageJam) was way too wonky for playability. There's actually a little magnetic pole in the butt of the magnet too that weakly repels very nearby metallic objects so that the magnet will be a little more likely to stick to things with it's head.  And instead of varying attraction with an inverse square of the distance, it's using an inverse cube of the distance for a snappier effect.

The movable objects (I-beams, barrels, etc) actually have a speed limit on how fast they can move so that they don't get launched too crazily into the air because of the magnetic "slingshot effect" that may happen if you move too quickly. When a moveable object makes contact with the magnet itself, it just uses an invisible breakable fixed joint to simplify the simulation, and making it invisible to the particle collisions. This joint is broken when the force on it is too much, or the player presses jump, and the object then becomes visible to the particle collisions again.

That's a really interesting way to make the magnetic simulation! Kudos for this awesome fun game!
I, myself, was wondering how did you get the camera to work so well and go around the objects to look for the character. It looks so great!

Also, I have no life and I got bored of seeing in frustation all the beams falling all the way down + I got to take 2 at the same time! :D

Amazing score! You finished the 4th floor - my wife is going to go crazy when she sees this! Congrats!

The camera motion was all done using Unity's new Cinemachine cameras. They have an obstacle avoider that you can use to avoid certain layers of objects, with some smoothing. It gets a bit difficult to see things in upper floors though - I should have added some kind of manual camera rotation feature, but ran out of time during the jam.

Manual camera rotation would have been REALLY helpful for building the back rows, indeed o_o"
So, Cinemachine is not only for cinematic scenes? :0 That's new to me! Gotta look into it, thanks for the info!

This is an absolute blast! The cheery and somewhat mischievous music paired with the goofy physics just makes for an all around good time!